UNSC receives report on use of chemical weapons in Syria 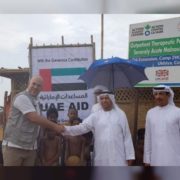