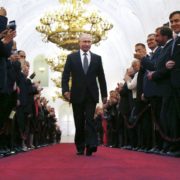 Putin sworn in as president for fourth term